6 of the World’s Most Famous Rugs

6 of the World’s Most Famous Rugs

The world’s most famous rugs tell stories about the times when they were woven. Some also hold secrets and keep us enthralled with their mysterious origins. Once adorning palaces or places of worship, they spark the imagination.

These rugs are also among the most beautiful and intricate of artworks.

The Emperor’s Carpet is a highly detailed 16th-century rug from Safavid Iran. At some point, the carpet found its way to Russia for a while before being gifted to the Hapsburgs in Vienna around 1700.

The carpet’s intricate patterns feature both real and mythical creatures such as dragons as well as floral scrolls, cloud bands, buds and blossoms. 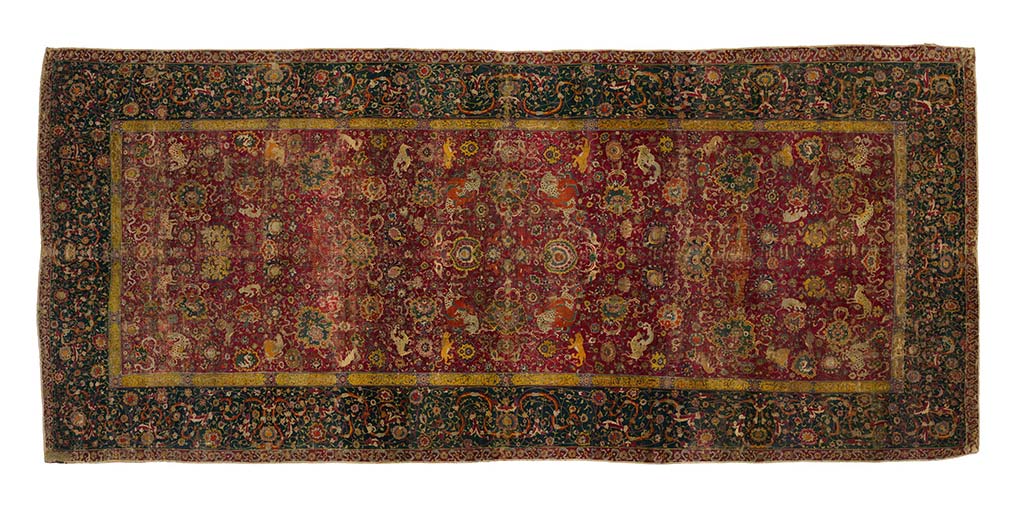 The rug was acquired by the Metropolitan Museum in 1943. Its condition was so delicate that it was only put on display twice over the next 60 years.

In order to have the carpet on display on a more regular basis, the museum embarked on a painstaking conservation program to stabilise it and preserve the colours and lustrous wools.

The Armenian Orphan rug, also known as the Ghazir Orphans’ Rug, was woven by the orphans of the Armenian genocide in Ghazir, Lebanon.

The carpet took 18 months to complete after which it was gifted to US President Calvin Coolidge in 1925. The Coolidge estate returned it to the White House in 1982. 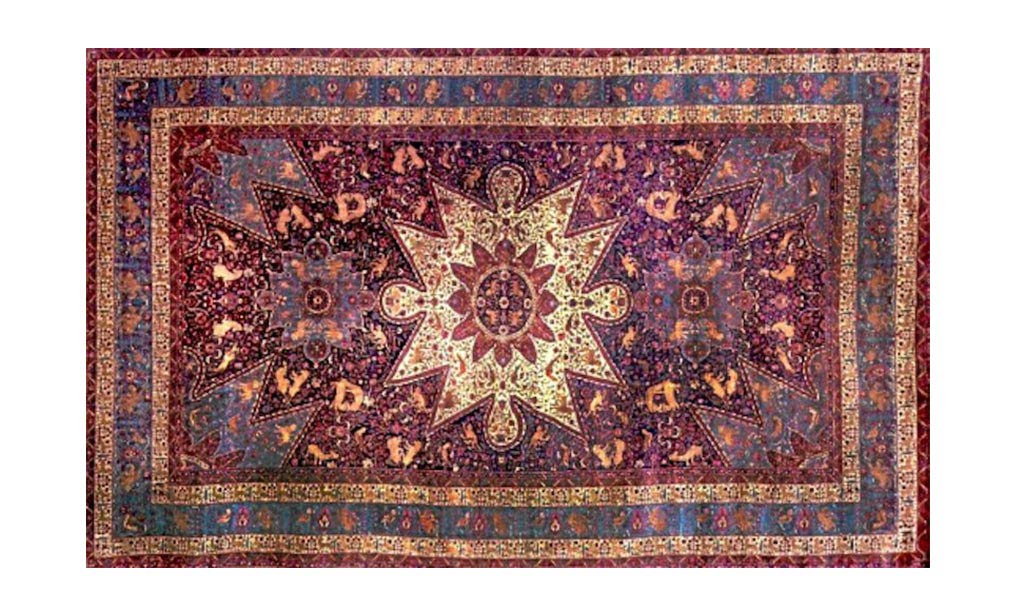 The carpet’s design depicts scenes from the Adam and Eve story as well as lions, unicorns, eagles, and birds. It measures 3.53 by 5.61 metres and contains over 4 million hand-woven knots.

The rug has been displayed a few times throughout its life, most recently in 2014 at the White House Visitor Center as part of a temporary exhibit.

The Ardabil rug is among the oldest Islamic rugs in the world. It’s one of a matching pair of rugs made for a Sufi shrine in the town of Ardabil in Iran.

The rug measures 10.5 by 5 metres, making it one of the largest carpets in the world as well as one of the oldest. It has a knot count of 5300 knots per 10 square centimetres. 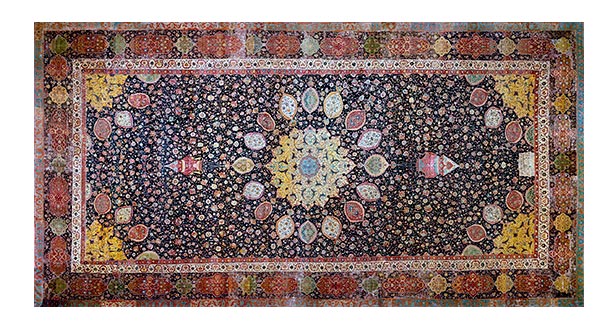 The rug’s design features geometric patterns, floral flourishes, cartouches for calligraphic inscriptions and a central medallion with two lamps suspended from it.

After the shrine was damaged by an earthquake, the two matching rugs were sold to cover the repair costs. The new owners decided to sacrifice one of the carpets in order to repair the other, thereby combining the two rugs into one.

Another of the world’s most famous rugs, the Nigde Carpet is named after the town of Nigde in Turkey. This is where it was discovered in a mosque in 1908.

The origin of the Nigde Carpet remains something of a mystery.

The rug measures 7.3 by 3 metres and features a pattern characteristic of Ottoman artwork. However, the geometric shapes and flower motifs suggest Caucasian and Persian origins respectively.

The weaving technique used to make the rug is characteristic of rugs woven in the area around Kerman, Iran. However, the rug uses cotton warp and wool pile, which aren’t typical of this style.

The Nigde Carpet is currently housed at the Metropolitan Museum in the United States. It was gifted to the museum from the private rug collection of Joseph V. McMullan in 1956.

The Coronation Carpet was used at the 1902 coronation of Queen Victoria’s son, Edward VII, hence the name.

The carpet is believed to be from Tabriz in Iran, due to the carpet’s exceptionally high quality. At the time, only the best carpets came from Tabriz. 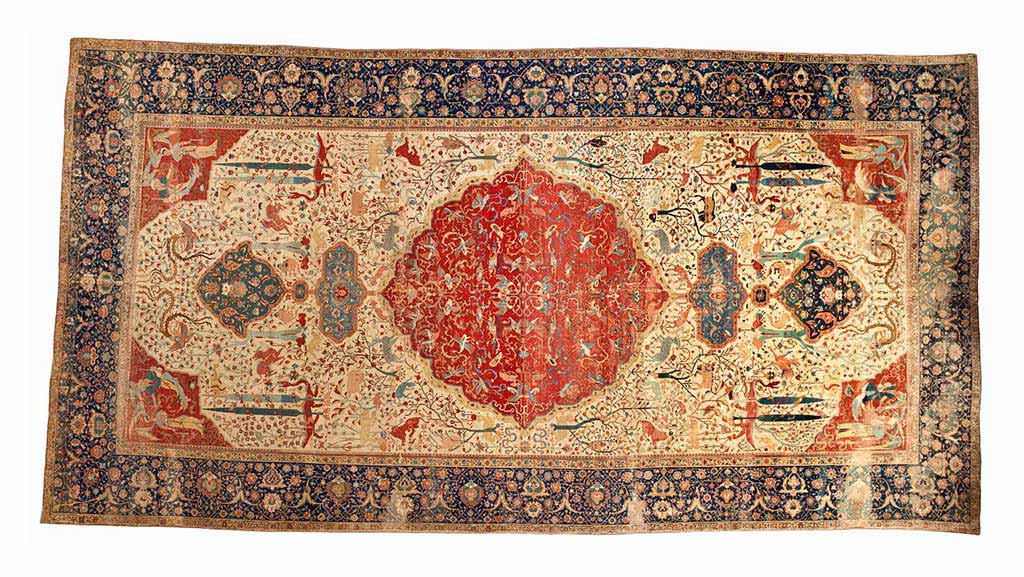 The carpet measures 7 x 3.6 metres and has a similar design to other Persian carpets of the time. The centre features a medallion and the floral designs seem to depict a garden with plenty of animal and tree motifs.

The exact date that the carpet was woven is undetermined although it’s thought to be from the Safavid period in the second quarter of the 16th century. Very few carpets from this period survived, making the Coronation Carpet particularly rare if true.

The Spring of Khosrow Carpet

Unfortunately, no one today knows exactly what the Spring of Khosrow Carpet looked like.

Although it’s no longer around, it’s considered one of the world’s most famous rugs.

Also known as the Baharestan Carpet, this 6th-century carpet is believed to have been a very large silk rug with precious gemstones and metals woven into it.

It’s home was the palace in the ancient city of Ctesiphon, southeast of modern-day Baghdad. 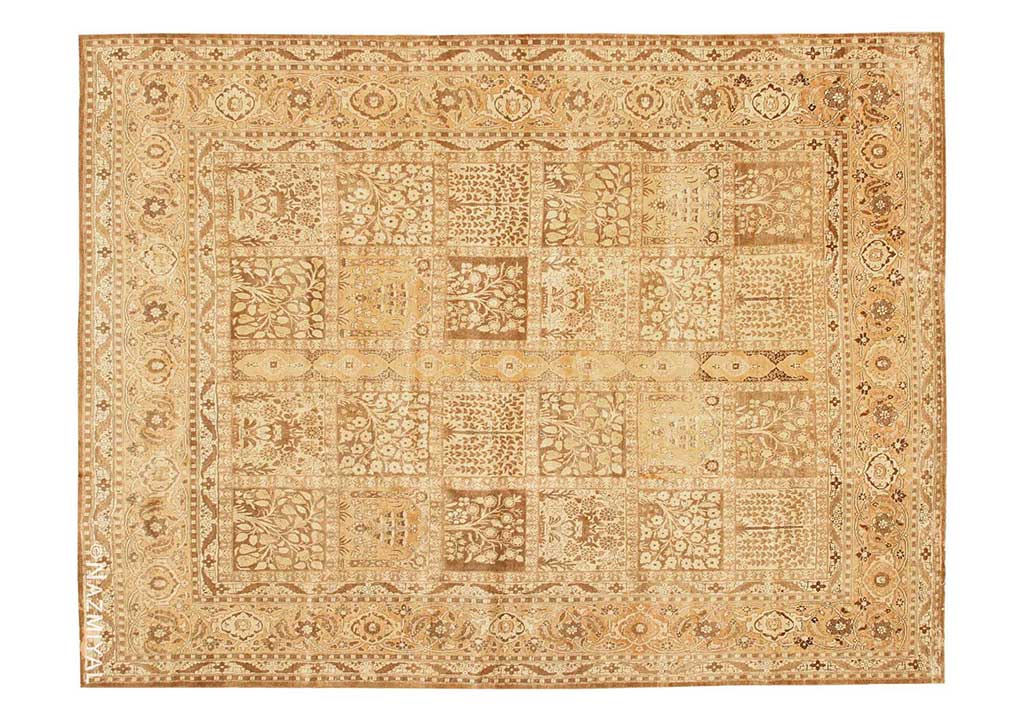 Some claims say the carpet was a massive palatial rug, 120 by 30 metres. Other accounts put it closer to 25 square metres.

The carpet was what’s known as a garden carpet, which mimics the appearance of a Persian garden as viewed from above.

In the year 637, Arab troops invaded the city and raided the royal palace. The carpet, which was too heavy for the fleeing Persians to take with them, was cut into fragments and divided among the invading forces. Unfortunately, none of these fragments appear to have survived.

At Chelsea Cleaning, we don’t deal with the world’s most famous rugs, but we do offer expert, professional cleaning of carpets and rugs in the greater Cape Town area.

On our website, find out more about our loose rug cleaning and fitted carpet cleaning services.

Contact us for more information or a quotation and we’ll be happy to help.

9 Tips for Renting Out A Property in Cape Town

How to Cat-Proof a Couch (Is This Even Possible?)